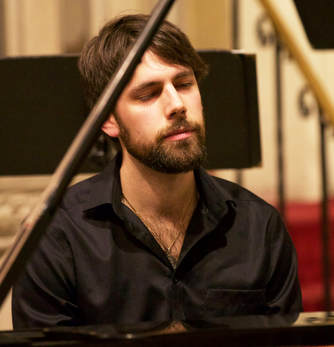 Steven Massicotte has distinguished himself as a powerful and passionate pianist, teacher, and composer who shares his love for music with audiences around the world. He has performed with numerous orchestras and plays as both a soloist and a collaborative musician. He is part of several ensembles including the Trio Fibonacci, Bohème, Gaudi Trio, and Duo Namaskar. In 2015 he started a pedagogical YouTube channel with piano tutorials which has already over 4000 subscribers and 500,000 views.

He is a laureate of numerous competitions and awards, most notably the Prix Joseph-Rouleau for Best Pianist from Quebec at the Montreal International Musical Competition, the first-prize winner of the Concours de Musique Hélène-Roberge and the Concours de musique Sorel-Tracy, the 2nd prize at the International Chamber Music Competition of Malta, and the 3rd Prizes at the International Chopin Competition in Czech Republic, the Shean Competition in Edmonton, and the Toronto Symphony Orchestra Competition. He is the grand winner of the OPMEM concerto competition, the Concerto Competition of Université de Montréal, and he is a two-time finalist and winner of the piano category of the prestigious Prix d’Europe competition.
Steven Massicotte has also attended master classes and studied with renowned pianists such as Marc Durand, Robert McDonald, John Perry, Benedetto Lupo, Stephen Kovacevich, Dang Thai Son, Jacques Rouvier, Anton Kuerti, André Laplante, Jimmy Brière, Jean Saulnier, Julian Martin, Logan Skelton, John Novacek, Martin Kasík, and Avedis Kouyoumdjian; in addition to being a scholarship recipient of the Orford Arts Centre, Banff Centre, and the Canada Council for the Arts.
In 2016 he completed a doctorate degree in performance at the University of Montreal with teachers Marc Durand, Jimmy Brière, and Jean Saulnier. During his studies he performed with different orchestras both Rachmaninov’s 2nd and 3rd piano concertos. He is also a graduate of the Conservatory of Music of Montreal as well as the University of Music and Performing arts of Vienna, Austria.